Kaunas old town is relatively small, but full of nice buildings, cafes, restaurants, museums. This is the best place in Kaunas to spend your time.

The castle became the residence of thetown’s governor Sunigaila after the end of wars between the Teutonic Order and the Grand Duchy of Lithuania, The jail and the court of the castle survived into the present. The castle was fortified and construction of a new bastion for cannons began when the Livonian war (1558-1558) started. The castle lost its defensive value after the end of the war. The castle was partially destroyed in the 17th century  during the war between Lithuania and Russia. Two towers and most of the castle’s area were washed out by the  Neris River during the 17th-19th centuries .
Construction of houses in the territory of the castle was authorized by the Russian administration in Kaunas in 1870. The houses were demolished in  1930. More recently, scientific research of  the castle were carried out and the castle was slowly reconstructed. The castle was partially reconstructed during the Soviet era and museum was opened in the castle.  The main tower was reconstructed again in 2010.
The bastion with a tower, a part of the second tower and the wall fragments are the only objects  that survived into the present. The City museum was opened in the main tower in 2012. Visitors of the castle can see the exposition of the museum, the old jail and thecourt.
The house was owned by Jesuits and reconstructed in the 17th century. The building housed the Jesuit chapel until 1772 and collegium until 1773. More recently, the house  was reconstructed once again. The name Perkunas (Thunder) was first introduced in the 19th  century. It derives from Lithuanian pagan god named Perkunas.
The first drama theatre was founded here in 1844, which was closed in 1863. The House of Perkunas  was once again reconstructed in the same year. It housed the Russian orthodox school that operated here until the beginning of the 20 century. It was taken over by Jesuits and stayed in their possession from 1924 to 1944
The house was reconstructed in 1964-1968.
Currently, the House of Perkūnas is in possession of Kaunas Jesuit Gymnasium. It houses  the  Memorial museum of  poet A. Mickiewicz.
​In 1855, during the Crimea war, Kaunas was the only river port in the Russian Empire, used for trading with other countries. The Prussian ports were the main trade partners. The total of approx. 5000 ships per year could be served by the port at the time. The trade and winter port was relocated to the area near the Nemunas island and the Church of the Holy Cross (Carmelitian) in 1917 by the German occupational government, where it stayed during the Interwar period when Lithuania regained its independence. The port was also used as a shipyard.
Kaunas had 30 passenger ships serving the routes between Kaunas and Smalininkai and between Kaunas and Babtai during the Interwar period (in the 20th century).
There was a shipyard in the Nemunas island during the Soviet period. The port and the shipyard were moved to Vilijampole, the eldership of Kaunas, in the seventies of the 20th century (where they are operated in our days).
Raketa hydrofoil was used to carry passengers from the port in Vilijampole to Nida,  the most beautiful resort of Lithuania.
More recently, the port was relocated to a new place in Vilijampole with a small  quay for tourists and private boats.
​You can spend time enjoying nice views of the Nemunas River from the old river port and drinking coffee in the local restaurant. The port is a venue of frequent summer festivals and open air concerts. ​
Napoleon’s invasion and was later reconstructed. The monastery was closed during the Russian occupation (in the first half  of the 19th  century) and the catholic church was turned into Russian Orthodox church. The building of the monastery served as a chancellery of the Russian police and military for a while. The  building of the monastery was abandoned in 1862 and was demolished in 1870. Some walls of the building were reconstructed and became a part of  a new hospital (the facades of the Baroque style were destroyed). The only remaining elements of the old monastery were its wall and gate. Building at Muitinės str.2 also became a part of  the complex of the hospital buildings.
The building housed the city hospital in 1918-1940. It was operated as a psychiatric hospital during the Soviet period .
In 2006 the management of the building was delegated to Kaunas faculty of Vilnius Academy of Art . The building is currently under reconstruction.
Other the Old town objects are listed in: churches, museums, the Town Hall square
You can reach the City Centre from the City Hall square  by foot. Take a walk down  the Vilniaus street – the main street of the Old Town. You will find coffee shops  (which are turned into open air coffee shops during in a summer season) and stores. 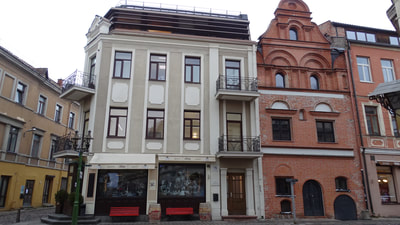 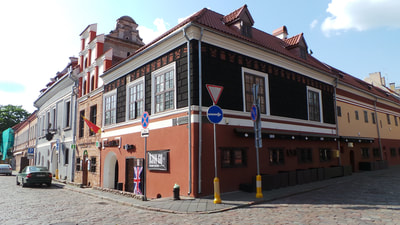 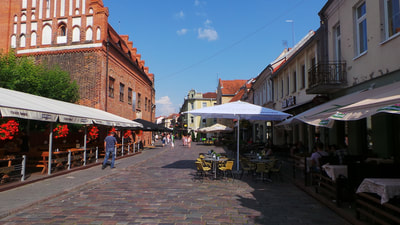 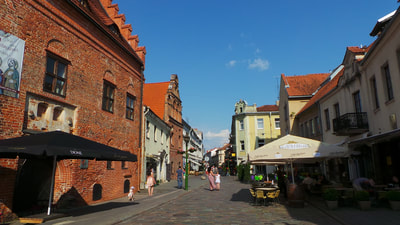 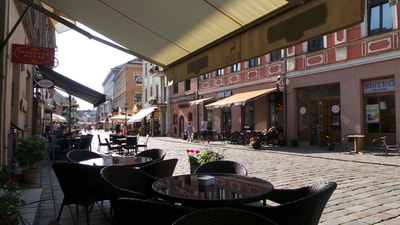 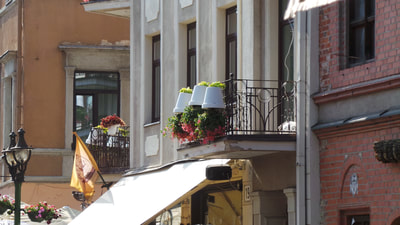 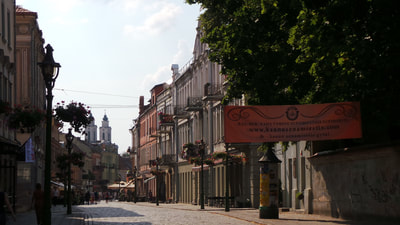 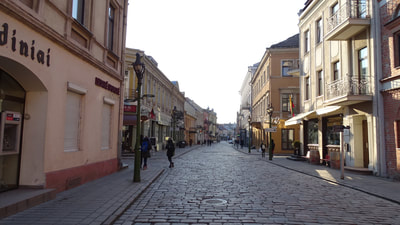